Aleksandr Bolkvadze. Again about the fool 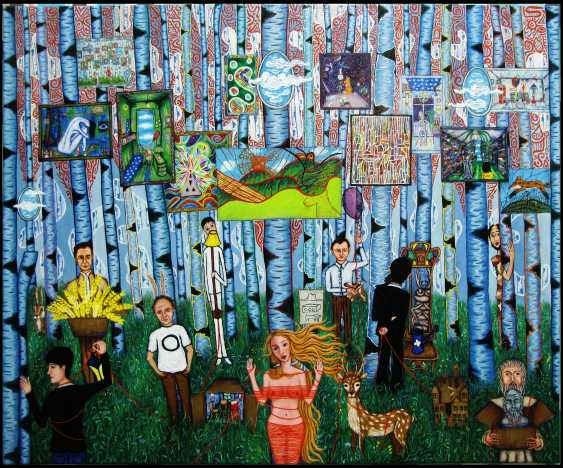 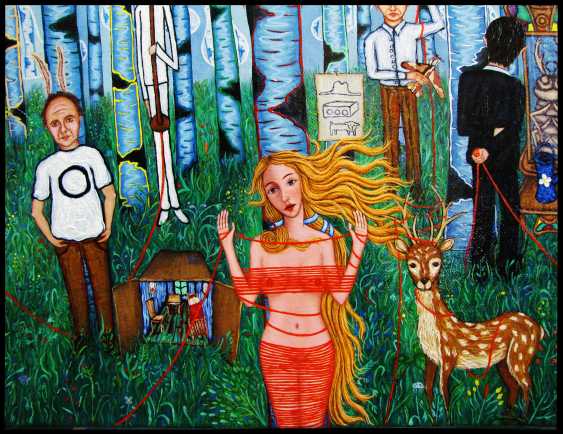 Artist pagePushCommentsFavorites
Price:RUB150000 RUB 150 000
Buy it now
Make offer
Aleksandr Bolkvadze. Again about the fool
"Again about the fool" oil on canvas 110x90
"Fool walks through the sky, looking for a fool stupid themselves. "Egor Letov
"Earthly life passed before the half,
I found myself in a dark forest,
Lost the way in the darkness of the valley.

He was, Oh, say,
The wild forest, dense and threatening,
Whose ancient horror in the memory of a bear!

So bitter is it that death is hardly worse.
However, the benefit of abretti forever
Say about everything I saw in those woods" of Dante Alighieri

If to speak about my paintings in art history terms, this work is my software. Seven years ago, holding a picture of "About the fool or the new Aristotle", I have realized that this is only part of what I wanted to show. In the future I plan to continue this story in greater detail as part of a media project with video and more detailed description of each of the characters.
The name implies that this is another work in some way relevant to the work of Egor Letov, and once again shared here, for the most part, only the name, although in the first picture was my attempt to implement some of the images of that particular song. The main epigraph to this picture are the first three stanzas of "the divine Comedy", which in the context of my paintings, and in General, in some way resonate with the song of Egor Letov. It is very important that the primary source for this song was an old Russian spell-hex: "walking stiffs in a circle, looking for dead person deader themselves" that in the future - will allow me to bring these two histories into a single concept, even, it is possible to unite with some other locations and worlds already on the semantic level.
For me it is something like the threshold of the dream world, I'd like to build a kind of "unknown Kadat", which is described in the works of Howard Lovecraft, and this film begins a kind of overcoming the boundaries of reality. All the picture space is organized so that the abstract and the surreal intrudes into the usual figurative, here full there are superimposed on each other both of these the concept of reality.
As in the previous film in this series, the composition is a certain similarity of the forest with paintings on trees and characters involved in their own Affairs. The last time it was portraits of characters that have shaped my view of the world and my role in it. Each tree was something of a pillar with images of people that represented some of my views, they always remained in their places and pointed me in the direction. Now, all very different, I got so immersed in their world that all the authorities were left behind and I see the only my past paintings, including one that just said. My paintings serve me guidance now, and the characters seemed to come down from their own portraits and become part of my world. This moment I mean when I say that this is my "soft" picture. Every a period of time, after each of my personal overcome myself, I create a picture that shows my worldview, is a kind of report, and as soon as I realize it, I'm starting a new overcome, followed by a new report.
A selection of paintings on trees is also not accidental - it is their I see the following for updates. That is, now, them for me as if does not already exist in the form in which they are depicted. These works will be redone in the framework of my new features and styles. Over time, these transformations will affect most of my early paintings, and most likely it will happen regularly. As for the characters, not all of them turned out just as I imagined. Now, I'm not sure what I can say about them as people imagined, when I tried to make the mise-EN-scene.
First of all we should pay attention to the girl in the center of the picture, which is somewhat similar to the image of Venus from the Botticelli painting. Here it is not only Venus, it looks more modern, the figure of the other, and pose(open hands) as the mother of God Orthodox icon which in turn borrowed from pagan traditions appeal to the spirits of their ancestors. The red thread gives it a new role of Ariadne in the border world of ghosts and memories. So, I took this image, but enriched it with new meanings, moreover, that the very Simonetta, posed once, for the well-known Botticelli painting "Birth of Venus", managed to try to imagine the images and Venus and Madonnas and simple women.

Characteristics of the artwork - item 16126 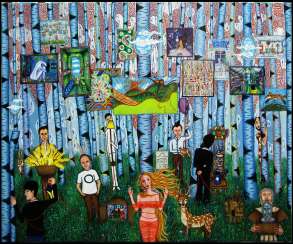