Lot 7. A planet beyond Neptune 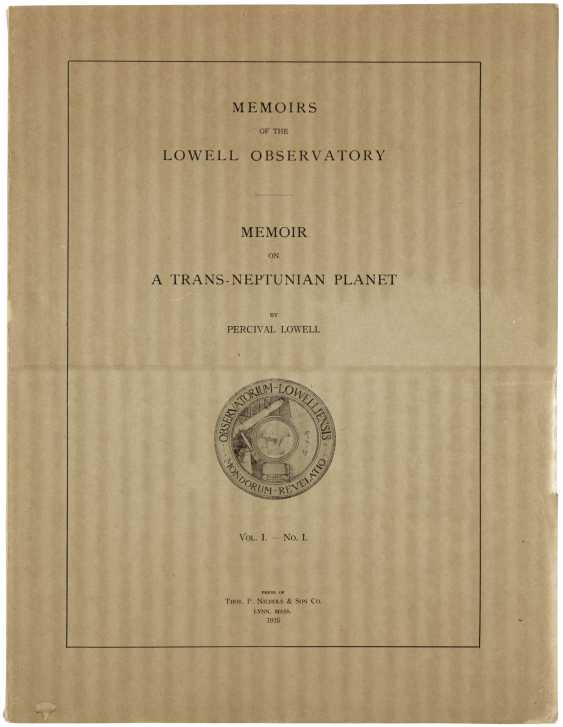 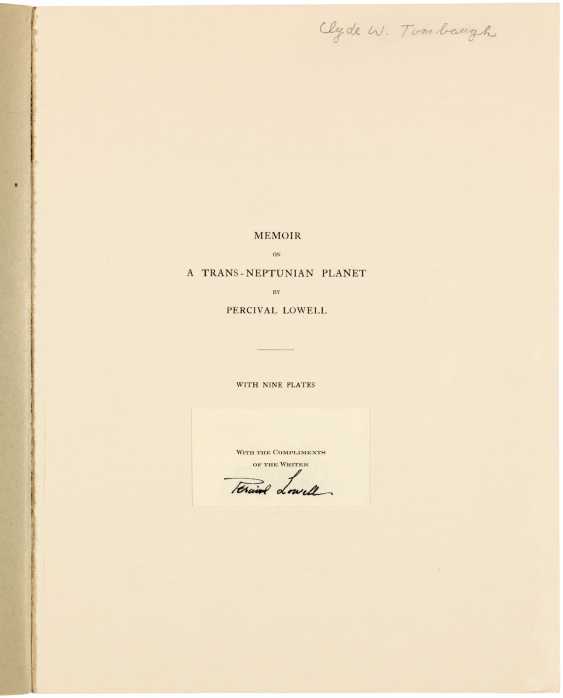 First edition, surely the most desirable presentation copy inscribed by both Lowell and Clyde Tombaugh, of Lowell’s prediction of the existence of a planet beyond the orbit of Neptune.

Lowell’s paper sparked a 25-year search that culminated in 1930 with the discovery of Pluto by Clyde W. Tombaugh at the Lowell Observatory. ‘More than any other astronomer of his generation, Percival Lowell (1855-1916) had a profound influence on the general public. His thesis that the planet Mars was the abode of intelligent life continued to excite the public mind decades after his death … Lowell’s name is also forever linked with Pluto; although he did not live to see that distant planet, there is no doubt that his inspiration advanced the date of its detection by many years’ (DSB). ‘What started with Percival Lowell’s musings about a theoretical ninth planet led to mathematical and photographic studies that survived Lowell’s death and set the stage for Tombaugh’s eureka moment … Lowell estimated locations of Planet X and published his findings in the 1915 Lowell Observatory publication, Memoir on a Trans-Neptunian Planet. Unfortunately, Lowell died the following year, before he had a chance to complete a photographic search in the targeted area of the sky. Eleven years after Lowell’s death, the final phase of the Observatory’s search for Planet X commenced … Abbott Lawrence Lowell, Percival's younger brother and president of Harvard University, gave $10,000 for the construction of a new telescope, a 13-inch photographic instrument usually referred to as an astrograph. To operate the telescope, director V. M. Slipher hired a young man from Kansas of ‘the self-made type,’ Clyde Tombaugh. Tombaugh arrived in Flagstaff in 1929 and soon took over the systematic search for Planet X, examining the area of sky Lowell had indicated in Memoir on a Trans-Neptunian Planet. The 13-inch telescope was ideal for the search, and Tombaugh had the patience and attention to detail necessary for the work. On February 18, 1930, he discovered what would soon be named Pluto, completing the search begun by Percival Lowell 25 years earlier’ (Schindler, ‘Percival Lowell’s three early searches for Planet X’, Astronomy.com, May 14, 2015).

‘Tombaugh had been corresponding with Vesto Melvin Slipher, Director of the Lowell Observatory, during 1928. Early in 1929, Slipher offered Tombaugh a position to work with the 33cm Astrograph. Tombaugh traveled from Burdette, KS, to Flagstaff, AZ, arriving at Lowell Observatory on 15 January 1929, with absolutely no idea he would be conducting a search for a new planet. Tombaugh exposed more than 150 plates before his epic exposures on 23 January 1930 and 29 January 1930. Even then, the discovery was not immediate. To examine the plates, Tombaugh used the observatory’s blink comparator, where first one plate is illuminated and then the other. …Finally, on 13 March 1930, on what would have been the seventy-fifth birthday of Percival Lowell, the announcement was made. It is interesting to note that this was also the date of the first planetary discovery since antiquity, by Sir William Herschel, 149 years earlier. The Lowell Observatory’s reputation was secure, and Clyde Tombaugh – who less than two years before his discovery was a farmboy on the plains of Kansas – was assured a place in history’ (D. A. Weintraub, Is Pluto a Planet? A Historical Journey through the Solar System, 2014, pp.299-300). The observatory officially proposed the name Pluto (which had been first suggested by an 11-year-old girl inspired by the notions of darkness and distance) on May 1, 1930, with the symbol being PL, the first two letters of Pluto and coincidentally the initials of Percival Lowell.

In 2006, the International Astronomical Union voted to strip Pluto of its planetary status, making it the first member of a new class of objects called ‘dwarf planets.’ This decision has proved controversial, among both professional and amateur astronomers. 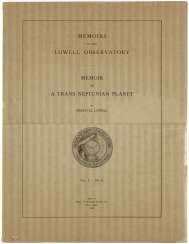