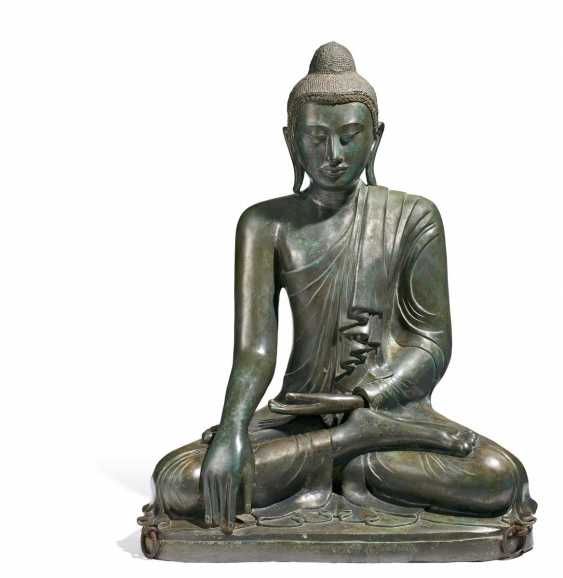 Bronze mit Resten von Vergoldung und Lack. This life-size bronze sculpture depicts Buddha Shakyamuni
in the moment before his Enlightenment. After defeating the
fierce assaults of the armies of Mara, god of death and desire,
and resisting the seductions of Mara's sensuous daughters,
Shakyamuni's right hand touches the earth (bhumisparsha mudra)
to call her as witness to his victory.

The origins of this image can be traced back to a famous Buddha
sculpture in the Mahabodhi temple at Bodhgaya. By the
11thcentury, Bodhgaya had become the most important site for
Buddhists in India. After all, this was the place where Buddha
Shakyamuni experienced enlightenment.

The great King Aniruddha of Pagan (ruled 1044-1077), a devoted
Buddhist, so admired the Mahabodhi temple, that he had his royal
seals engraved with an image of this temple. In the early
13thcentury a temple was founded in Pagan that closely resembles
the temple in Bodhgaya. Aniruddha also commissioned
numerous stone and bronze images of the Buddha, many of
them in bhumisparsha mudra. Stylistically these 11th century
sculptures closely follow their Bodhgaya models. Henceforth
this image became one of the most popular depictions of Buddha
in Burma and throughout Southeast Asia.

The Burmese Buddhists follow the Theravada tradition. "Relics,
their finding, propagation and use, became a constant feature
of later Theravada Buddhism in Southeast Asia. The desire for
primary texts, correctly ordained monks and Buddha relics is
based on the notion that the validity and effectiveness of the
relic objects, teachings and monks . are determined by how
'close' they are to the historical Buddha. This search, then, for
pure and true texts, monks and relics, initiated primarily under
Aniruddha's reign, became characteristic of Burmese and Thai
Buddhism" (1).

Robert Brown (2) recounts how important Bodhgaya remained
for Burmese Buddhists until the 19th century: "In 1830 the king of
Burma sent a diplomatic mission to India, then governed by the
British who had successfully waged several military campaigns
in Burma. The delegation remained in India for three years,
during which they visited Bodhgaya, discovering the Burmese
inscription of the thirteenth-century Burmese mission., witnessing
a miracle and taking several sprouts from the bodhi tree. Later in
Calcutta they requested a Pala period sculpture of the Buddha
from Bodhgaya. The mission returned to Burma having failed to
negotiate a favourable political agreement with the British, but the
mission was considered a great success by the Burmese because
they returned with the tree cuttings and the Buddha image".

Soon afterwards, in 1857, the rulers of the Konbaung dynasty
established the new capital of Burma in Mandalay. Its founder,
King Mindon (ruled 1853 - 1878) was a pious royal patron of the
highest order. A treatise upon royal administration since 1044
singles out only seven monarchs over an 800 year period as "having
distinguished themselves to an exceptional degree by truly
following their kingly duty of supporting and promoting Buddhism" (3).
King Mindon was amongst the selected.

This supremely beautiful bronze sculpture is dated by an inscription
on the front of its base to the last years of King Mindon's reign:
"We make reverent offering of the image of Buddha of copper.
This is the work of merit of U Yan Htar and Ma Baung, [in the]
year 1876" (4). We do not have any information on the donors,
but the superlative quality of this bronze suggests that it was pro-
duced in a royal workshop.

Buddha sits in the lotus position on a plain base. Inserted iron pegs
with rings indicate that this image might have been carried in festive
processions. His eyes are half-closed in meditation, his head slightly
tilts forward. His body is draped in a heavy monk's robe covering
his left shoulder while leaving the right bare. His right hand is in the
earth-touching gesture, while his left, separately cast, rests in his lap.
The noble calmness and sublime spirituality make this sculpture one
of the great masterpieces of Buddhist sculpture from Burma. 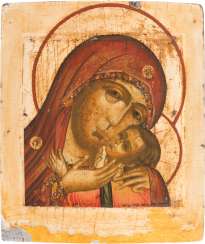 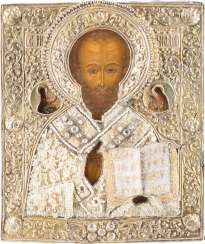 ICON WITH ST. NICHOLAS OF MYRA WITH PEARL-OKLAD
€500 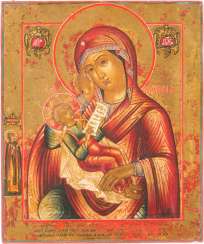 ICON OF THE MOTHER OF GOD 'SOOTHE MY SORROWS'
€500 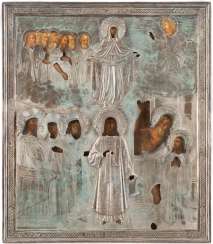 SMALL ICON OF THE MOTHER OF GOD 'MYRTIDIOTISSA'
€500 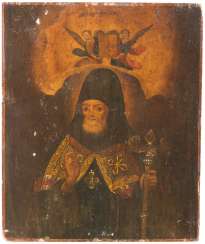 ICON WITH THE SAINT MITROFAN OF VORONEZH
€150 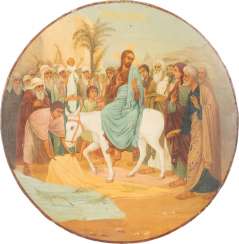 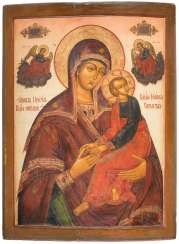 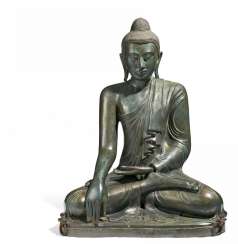