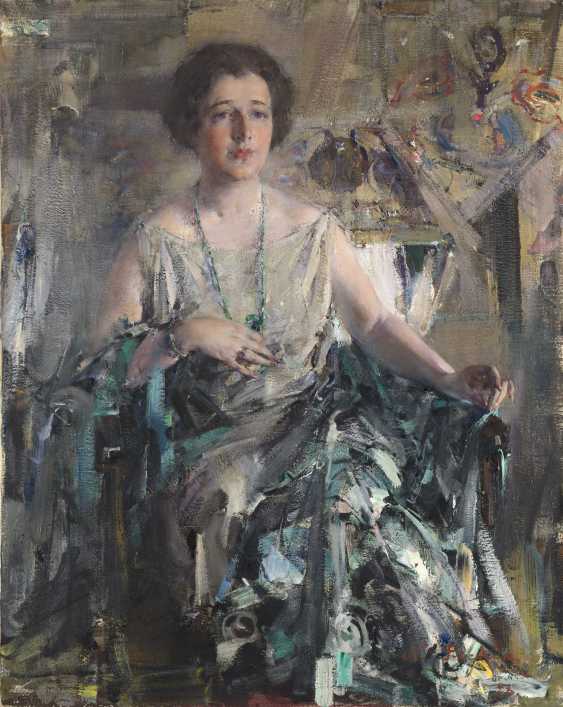 ID 12114
Lot 50* | FECHIN, NIKOLAI (1881-1955) Portrait of Duane , signed and dated 1926.
Oil on canvas, 127.5 by 102 cm.
Provenance: Commissioned from the artist by the father of the sitter in the early 1920s.
Collection of Duane Van Vechten, from 1926.
Thence by descent.
Estate of Mrs Novella and the late Edwin C. Lineberry, Taos, New Mexico.
American Paintings, Drawings and Sculpture, Sotheby’s New York, 3 December 2008, lot 101.
Acquired at the above sale by the previous owner.
Important private collection, Europe.

The portrait of the young American lady, Duane Van Vechten, painted by Nikolai Fechin in 1926, owes its existence to a string of events that had begun a few years earlier. The first of these was the artist’s meeting with the head of the dynasty, Ralph Van Vechten, a wealthy Chicago banker and one of Chrysler’s first investors, when he visited Moscow in order to assess his business prospects there. He had heard about Fechin from his brother Carl Van Vechten, a famous American writer, photographer and Gertrude Stein’s close friend, and thus he sought out the artist.

In the early 1920s, Ilya Repin’s favourite pupil, lauded by him as “Russia’s best painter”, was at the peak of his popularity, frequently participating in international exhibitions in Europe and the USA. When Fechin left Kazan and settled in New York, one of his first contacts there was Ralph Van Vechten, along with his adopted daughter Duane (1899–1977), who spent her time studying art and socialising with other gilded youth. Fechin’s family became close to the Van Vechtens, so much so, that later Fechin’s wife movingly dedicated her book to “Duane, one of my first and closest friends in the USA”.

Fechin’s career in the USA quickly took off. As the American scholar Dean Porter writes, “In New York and wherever else Fechin went, he was surrounded by influential patrons who... thought it a privilege to sit for this striking Russian artist with a remarkable portfolio of the portraits of nobility in Impressionist or Expressionist style... By 1925, art dealers from New York to Los Angeles were begging Fechin for his paintings.”

Portrait of Duane Van Vechten is a testament to the artist’s creative elation and thrill at the unbridled freedom of expression he enjoyed during his first years in the USA. Fechin embraced a technique based on broad and free brushstrokes – a feature of Repin’s late period – which, together with his formidable draughtsmanship, enabled him to experiment unreservedly. On the one hand, he consciously limited his palette to greyish-blue, green and olive tones; and on the other, he created flamboyant contrasts between the meticulously rendered face and hands of the model with the daringly generalised attire and ambience.

This apparent carelessness and the sweeping brushstrokes were in fact subjugated to a neatly calibrated internal concept. The artist overlaps the opposing long, broad brushstrokes that fill in the background and build up the texture of the greyish-green shawl, so that the form, instead of being flattened or dissolved, gains density and volume. Colouristically, the artist’s objective is a highly complex one. He deliberately uses a very limited range of pigments to create intricate colour combinations and to elicit numerous shades of grey and green. The portrait brilliantly reveals Fechin’s dashing virtuosity and rapture at his own mastery.

Fechin formed a lasting friendship with Duane Van Vechten. They even were neighbours for a few years when they both lived in the small town of Taos in New Mexico, where the artist went to receive treatment for his tuberculo- sis, and where Duane chose her permanent base. Taos still has an arts museum named after Duane Van Vechten, which commemorates the artist, philanthropist and collector, whose youth is preserved by Fechin in this outstanding portrait. 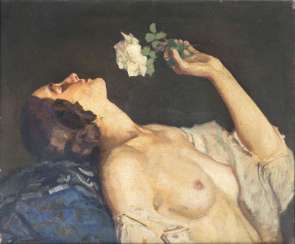 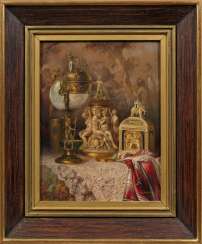 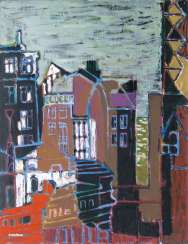 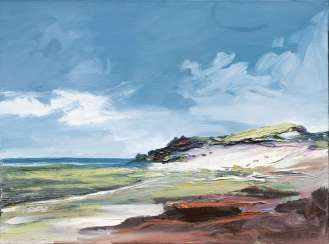 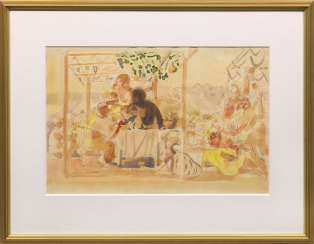 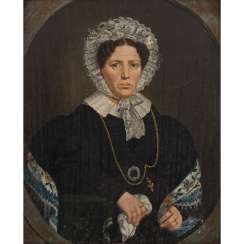 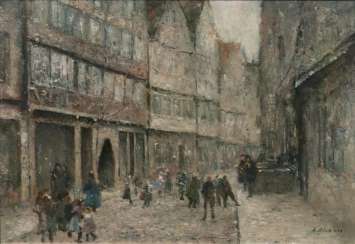 Street scene with children and musicians
€800 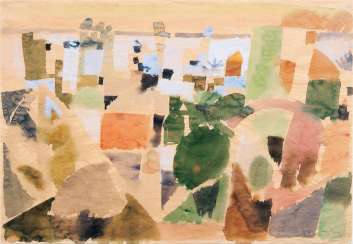