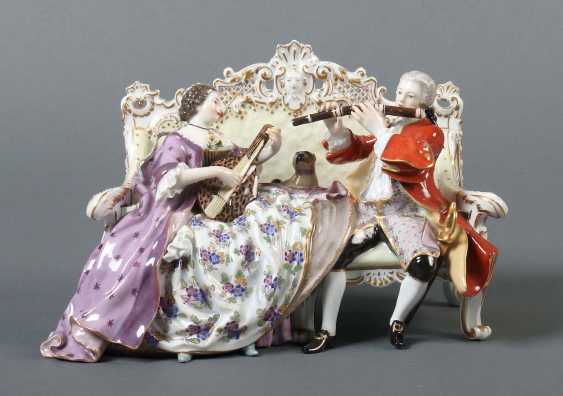 ID 307588
Lot 924Kaendler
Kaendler, Johann Joachim, and Ehder, Johann Gottlieb Meissen, presumably, Fischbach b. Arnsdorf 1706 - 1775 Meissen and Leipzig, 1717 - 1750. "Sofa group", E: 1737/43, A: Meissen, around 1850, porcelain, polychrome on-glaze painting, equipped partially gold, to lush raised emblem sofa-abiding, galantes Few in time typical garb with a Lute and flute in the middle of a pug, on the bottom side, under glaze blue sword mark, embossed model no. W 56, Bossierernr. 100, Malernr. 45, H: CA. 14,5 cm. Min. Gold operation, minimal spine damage, according to the head absent (glue), sanding band with fail. Kaendler himself into his work to report in November, 1737, and April, 1743, to the model of the present group of: November, 1737: "Two highly decorated Cannabee, what 2 Füguren sietzen, in the Massa Corrigiret, those are very tedious to both Füguren Musical weiln have Instrumenta in his hands, and, as it were, as, of Course, played." April 1743: "A Croppgen Before Ihro Königl. Majt. Completely alwo renewed a Cavallier Which is a fluyt travers bläset on a starck-Decorated Cannapee sietzet, similarly, befindl Next to Him, a Well-dressed lady. The sounds are walking and singing pre-put in is." Literature: see figures II; Bergmann, Meissen figures-model numbers A1-Z99, catalog No. 8; Ulrich Pietsch, The figural Meissen Porcelain sculpture of Gottlieb Kirchner and Johann Joachim Kaendler, Hirmer, München 2006, p. 18f Meissen.; The work reports of Meissen porcelain modeller Johann Joachim Kaendler 1706-1775, Edition Leipzig, p. 50, 96.

Margrit Linck-Daepp and Jacob, then looking back at the
CHF140 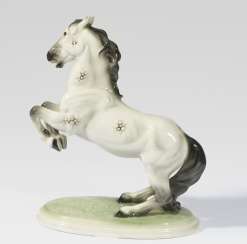 Be aufbäumendes horse on an oval terrain base
€130 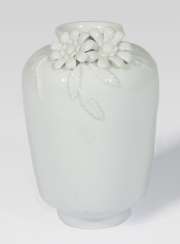 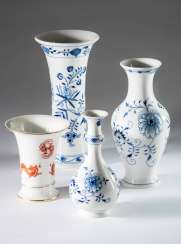 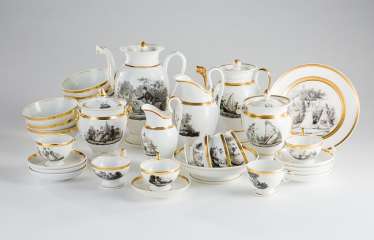 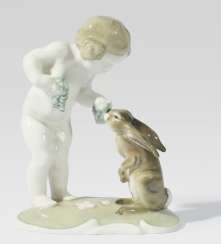 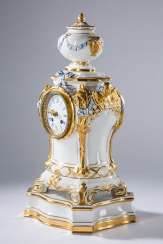 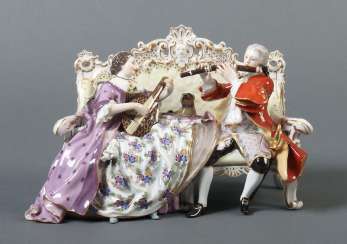