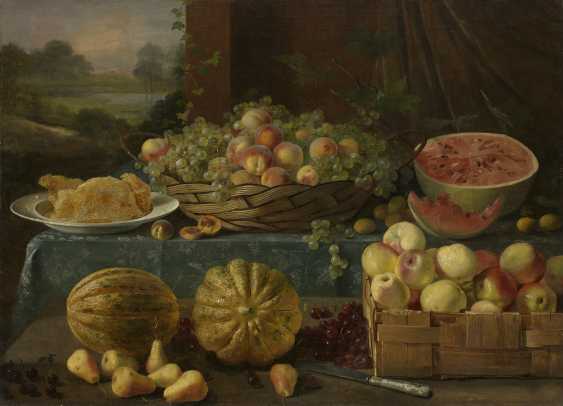 The Still Life with Fruit and Honeycomb by Ivan Khrutsky that MacDougall’s are now presenting for auction is one of the artist’s best works in that genre. Produced at the height of the painter’s fame, it gives a vivid illustration of the blossoming that the “fruit and flowers” genre enjoyed once again in Russia in the 1830s and 1840s — a genre attuned to the outlook underlying the Biedermeier style so popular at that time in Germany. It comes as no surprise that in 1839 the council of the Imperial Academy of Arts conferred on Khrutsky the title of academician, since he was “renowned for his excellent works... particularly with regard to the painting of fruit and vegetables”. In the meantime, his canvases and the prints made from them were immensely popular among art lovers and connoisseurs.

However, Khrutsky did not stop there. As he continued to improve his technique, he found in still life new and far-reaching possibilities. In the 1840s, he created a series of compositions, in which he combined a classical arrangement of fruit and vegetables with a landscape ( Still Life with Mushrooms, 1842, Kiev National Museum of Russian Art; Still Life. Fruit, 1850, Perm State Art Gallery). It is among these pictures, the most complex in concept and execution, that the painting now presented belongs.

Khrutsky used a fairly large canvas and built up several levels of composition, transforming the tables laden with fruit into a kind of podium. The wonderful abundance of nature’s bounty is skilfully arranged, as all the components of the composition are laid out in tiers, nearly taking up the whole pictorial space and moving right up close to the viewer. The left-hand side features an idyllic landscape, which elevates the overall space beyond its seemingly mundane content and expands the boundaries of still life. The details of the landscape, just like the wicker basket of apples in the foreground, can only be partly seen. This fragmentary portrayal evokes a sense of natural ease and freedom, which relieves the excessively formal structure of the composition.

The actual fruit is gathered into a single compact group, with the central part thrust into the foreground. Khrutsky’s contemporaries particularly valued the artist’s still lifes for the closeness of his manner to the painting of the old masters. Khrutsky’s art school, after all, had been the Imperial Hermitage, where he spent years copying the canvases of the European masters, including Dutch, Flemish and French still lifes. Following their example, the artist nearly always includes in his compositions, genteel signs of everyday life that hint at a human presence. Here we have a silver knife, apparently forgotten on the table, the wicker basket and a honeycomb oozing honey on a china plate.

The author of an 1839 article on Academy painting writing about similar still lifes by Khrutsky, says that the fruit he painted “...leaps right out of the canvas and seems to have just been picked”. In the still life presented here, the artist’s splendid workmanship certainly attains perfection. The textural variation of the components is expertly played out: the heavy velvet of the drapes hanging down in the background is right next to the chunky stitching of an expensive silver tablecloth; the knobbly skin of a melon is placed alongside the glossy surface of cherries; and smooth, sleek apples and tender, downy peaches are beside the rough fibre of the basket. This contrast method is also used in the juxtaposition of large and small objects, and round and flat surfaces; but all this diversity in the material world is blended into a single whole by the gold-tinted tones of the colour scheme and the even, mellow light.

Working with fine, imperceptible brushstrokes, Khrutsky paints in the details with love and care, rendering the palpable materiality of the surface of things. Through the use of glazing, whereby very fine, semi-transparent layers of paint shine through one another, the artist attains the delicacy of chiaroscuro modelling and a tonal unity of muted shades of colour, which give rise to a feeling of tranquility and harmony. 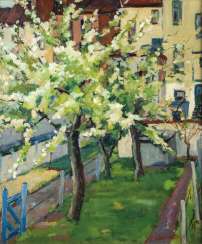 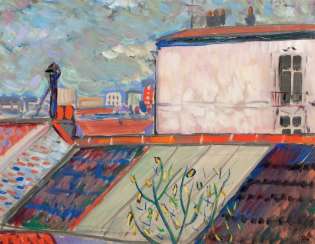 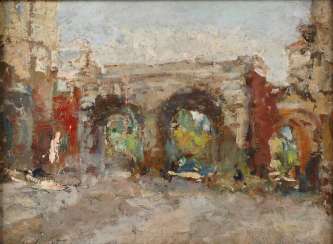 Luigi Mantovani, On The Triumphal Arch
€360 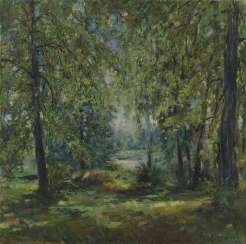 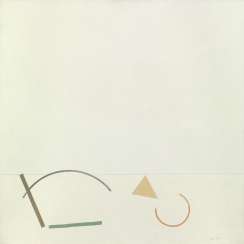 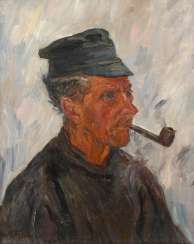 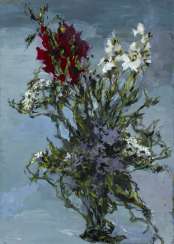 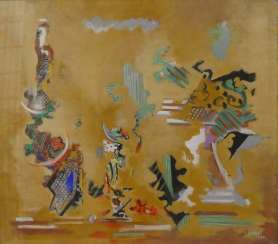 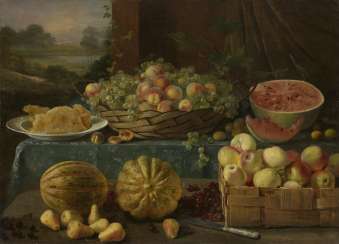