Lot 179. Tisi, Benvenuto ('Il Garofalo') . The sermon of the Hl. Paul on the Areopagus in Athens 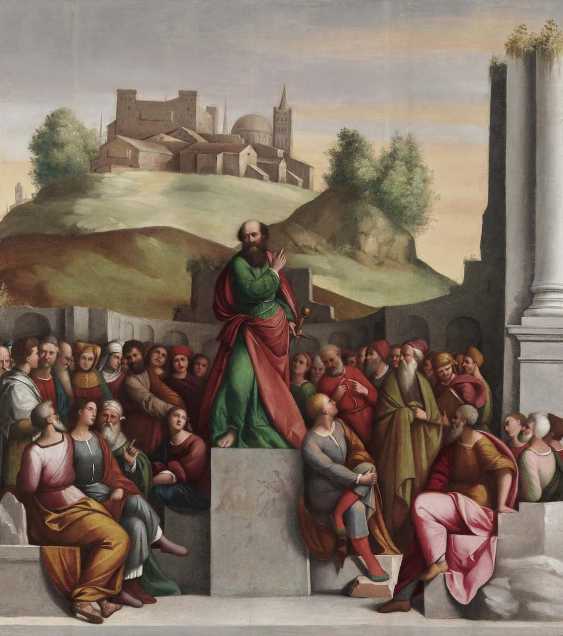 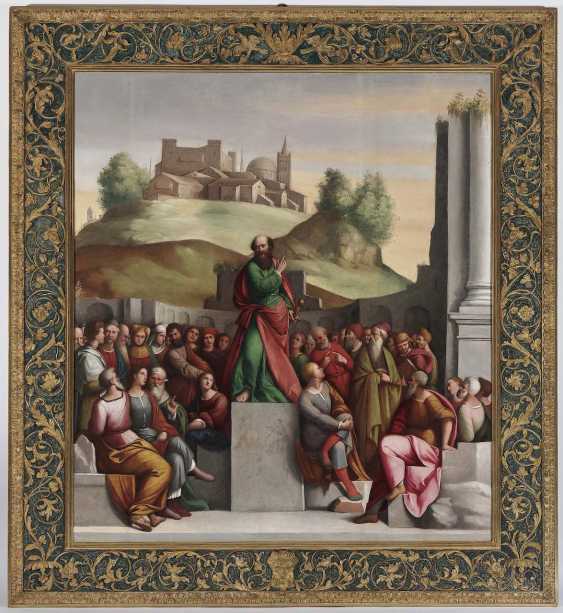 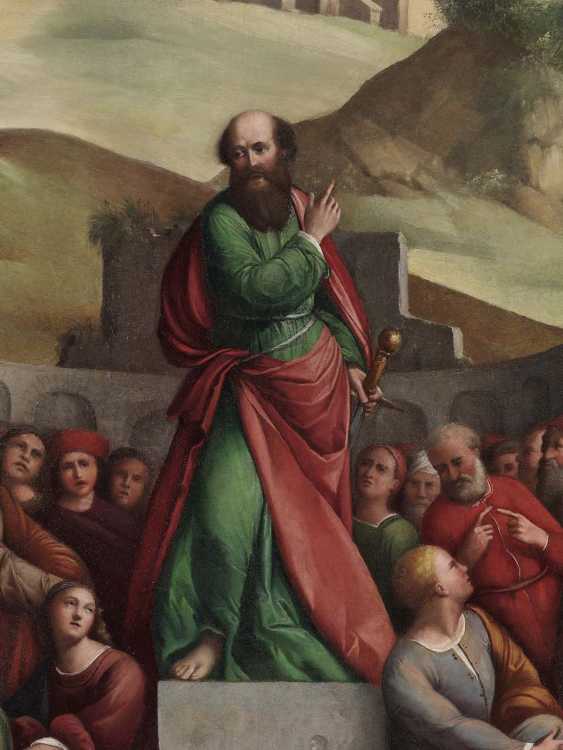 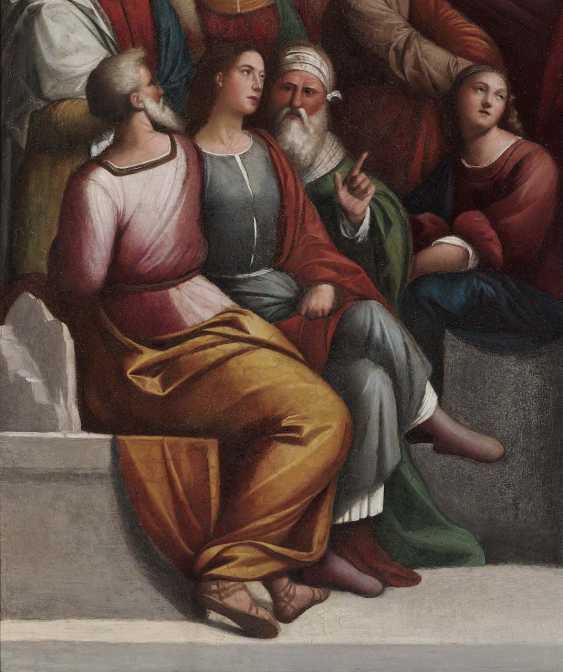 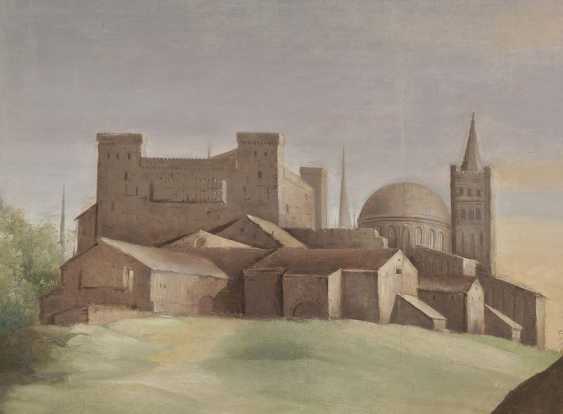 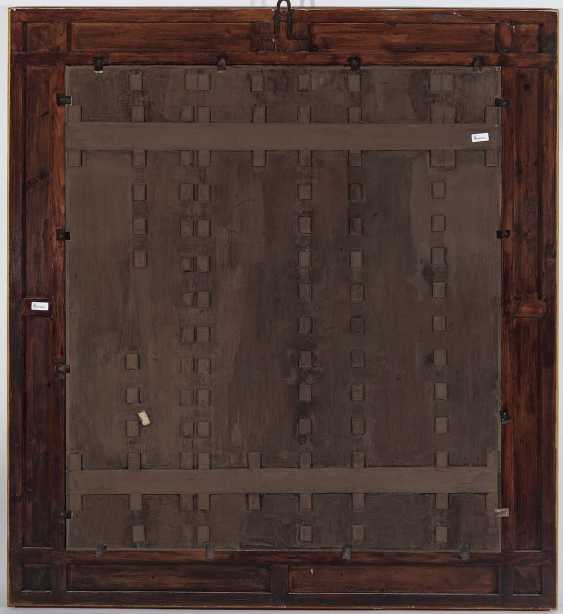 ID 212469
Lot 179Tisi, Benvenuto ('Il Garofalo') . The sermon of the Hl. Paul on the Areopagus in Athens
The sermon of the Hl. Paul on the Areopagus in Athens Oil on wood. 160 x 144 cm. Parket discounted. Restoration. Min. damaged frames. "Because when I passed by, and beheld your sanctuaries looked at, I found also an Altar with the inscription,' to AN UNKNOWN GOD. What therefore you worship, without knowing it, this I proclaim to you." (Acts 17, 16-34, 23). With these words, the helper directs. Paul on the Areopagus at Athens, his speech to the philosophers. They had him, after he had discussed in the synagogue and in the market with the residents about the myriad of "idols", the prayers he had seen in his courses through the town, on the Areopagus, his opinions and views. In a ruins, Arena, stage, adhere to the same, on a high Pedestal standing, the Hl. Paul, on the present painting in the midst of the audience, but also with each other, discuss the members of the Areopagus, the highest Council of Athens, again. In the preaching gesture, he raised his right Hand. On the Pedestal is weak recognize a representation, as he writes himself in his Epistles. In the Background is played back on a mountain in a town with a castle. Garofalo is repeated here a work which he had already created in 1523. At the time, he painted in the Augustinian convent of Sant'andrea, the city of his birth, a large-scale fresco, which consists of many individual scenes and the Old and New Testaments each other presents. In the centre Christ on the cross, to the left of him sits a personification of the New Testament, while the right leaves from him of the "Old Faith", the "synagogue" in the form of an old woman, blindfolded, riding on a donkey, in Hand a broken sceptre, holding the scene. The sermon of the Hl. Paul on the Areopagus is shown in the upper left corner of the fresco. In 1841 it was transferred to canvas and is now in the Pinacoteca Nazionale in Ferrara. The order of Garofalo to this fresco was in a time in which the Catholic Church and the Augustinian order, and in Ferrara, with the new reformation ideas of Martin Luther had to deal. At the same time, you saw seems to be in the Situation against the "Old Faith", represented by a small Jewish community in Ferrara, to want to put a sign (see Prosperi, s. u., p. 60). In this context, the Areopagus speech of the Hl comes. Paul's particular weight, since he can not preach against the Background of the tries in the whole of Athens established "graven images", the new, Christian Faith. The local reference of the representation Garofalos to Ferrara itself is abundantly clear in the case of the imagination playing a city in the Background: the dominant castle is nothing more than an Allusion to the Castello Estense, the seat of the Este in Ferrara. Michele Danieli emphasizes in its opinion that it comes in Garofalos frequent repetitions of his own pictorial inventions. For stylistic reasons, Danieli dated the painting in the period around 1535-40. Benvenuto Tisi, Il Garofalo, met the Pinturicchios, Perugino's, and especially Raphael's for the first time on his journey to Rome in the year 1500. The art of Rome, should largely shape of great influence also the work of Giorgione's, with which he was connected in friendship, however, was. In 1512, he undertook his second journey to Rome, it should now dawning of his "raffaeleske" create time. Also in the present painting the influence of Raphael's in terms of composition is not to be overlooked (see the "school of Athens", created 1510/11). To was wrong Garofalo filed over the years by science as the Epigone of Raphael, only in recent time his artistic individuality, which oscillates between the classical Ideal of the art of Raphael and of the lively and striking Venetian-color is appreciated. Garofalo took time out of his life with the Work of his contemporaries, and found in them Inspiration for their own unmistakable art. Opinion Of Prof. Michele Danieli, Bologna, 28. January 2019. We would like to thank Prof. ssa Anna Maria Fioravanti Baraldi, Ferrara, for their friendly support . She agrees with the opinion of Michele Danielis on the Basis of photographs. 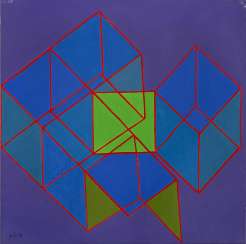 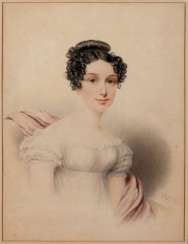 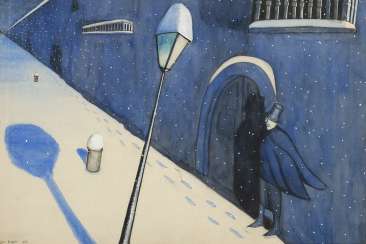 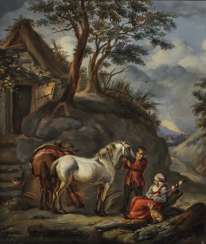 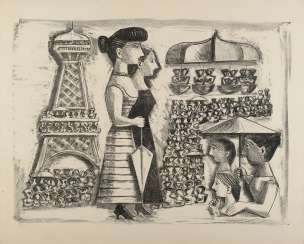 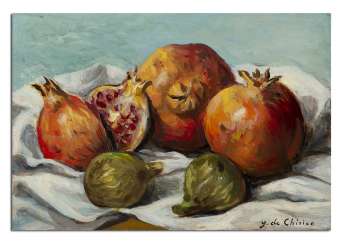 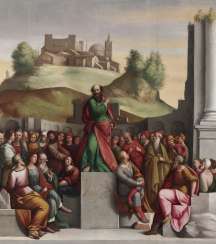