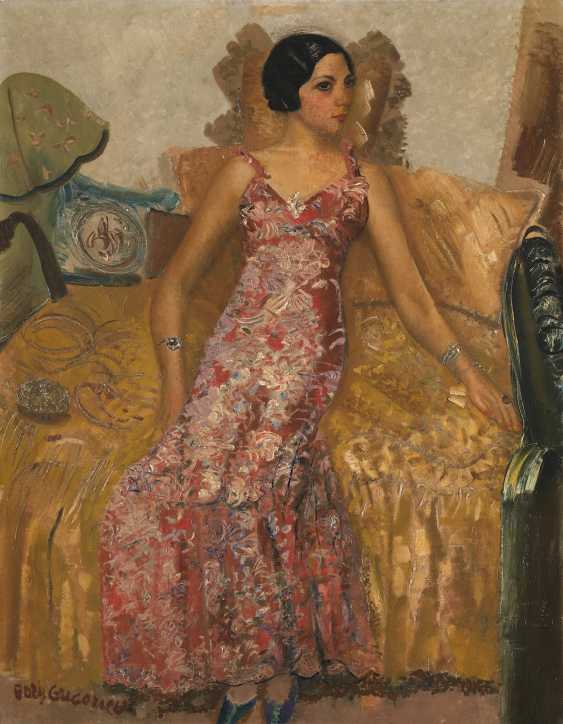 
Provenance: Collection of Selma Alexander, Los Angeles.
Bequest from the above to the present owner, c. 1982.
Private collection, Australia.

Authenticity of the work has been confirmed by the expert T. Galeeva.

The Portrait of Selma Alexander, offered here for auction, is an outstanding work by Boris Grigoriev, who in the 1920–1930s had a reputation in Europe and the USA as a master of the “Russian theme” and as a brilliant portrait painter. He was always attracted to human mysteries and the inner life of his sitters, which is why he focused primarily on their faces, expressive details and psychological characteristics. The sitter is depicted full-length, wearing an evening gown and expensive jewellery. The delicate figure appears to be simultaneously seated on a golden covered sofa and also standing elegantly, reminiscent of Renoir’s Jeanne Samary. The stylish Selma Alexander, clad in a scarlet dress with embroidered white flowers and wearing tiny turquoise shoes, conjures up an image of a precious toy in a glittering wrapping.

The free brushstrokes, complex textural surfaces and resonant bright colours of the work signal a shift in the painterly approach of the artist, who back in the 1920s, gravitated heavily towards Neoclassicism, with its precision of form and clarity of line.

Presumably, the new traits evident in this portrait are connected both with the general changes in the artist’s style but also with the status of his model – a society lady, then married to a well-known cultural figure in New York, the highly successful businessman, philanthropist and collector, Vladimir Bashkirov (1885–1969).

Moreover, Selma Alexander sponsored an exhibition of Grigoriev’s paintings and watercolours in New York from the 17–29 April 1933 in the Marie Sterner Gallery. This show was an important milestone for the artist, as the gallery owner, Marie Sterner, was a keen supporter and promoter of modernism in the USA, having worked with such artists as George Bellows, Arthur Bowen Davies, Elie Nadelman, Marcel Duchamp, John Sloan and others. Besides, it was Grigoriev’s first exhibition in the USA after an eightyear hiatus (in the 1920s, he used to exhibit in the New Gallery). The artist exhibited 18 paintings and 30 watercolours, amongst which, the present lot. It is stylistically similar to another portrait included in the exhibition, that of Anna Robene, who was another patron of the artists and whom he also depicted full-length and wearing a white dress.

In the aftermath of the exhibition, Grigoriev’s interaction with Bashkirov and Selma peaked, as evidenced by his numerous letters to the couple written in 1933–1934. In addition to the portrait of Selma, Grigoriev also painted her husband. More crucially, Bashkirov acquired a few of Grigoriev’s works for his private collection of Russian art, part of which is now in the Metropolitan Museum in New York. Among them were Fishermen (1922), Portrait of the President of Czechoslovakia Tomáš Masaryk (1932), Still Life (1932) and others.

Upon Grigoriev’s return to France, his friendship with the Bashkirovs grew even stronger. Bashkirov’s support, both financial and emotional, was essential to the artist at that time. In one of his letters to Bashkirov, written in his typically emotional manner, Grigoriev confides: “When I think of you, my heart shrinks – you are so far away. Not seeing you has become a great concern for me; honestly, it is hard. I hope you received my letter sent from the ship – as I travelled home, I was thinking more of you than of my home. My gratitude to you has no bounds, and this extends to your charming wife whom I remember fondly, please kiss her hands from me.”

In 1933–1934, Grigoriev repeatedly invited Bashkirov and his wife to visit him in France at Cagnes-sur-Mer, but it seems the meeting never took place. In the mid-1930s, Bashkirov’s family circumstances changed when he left Selma for another woman. However, his correspondence with Grigoriev continued until the latter’s death in 1939.

The work’s provenance is impeccable. After the 1933 exhibition, the portrait was displayed in Selma’s home in Los Angeles, where it was spotted by the present owner. Delighted by the impression it made on him, Selma exclaimed: “I’ll bequeath it to you when my time comes!” And she kept her promise. In 1982, the Portrait of Selma Alexander made its way to Australia and became part of her close friend and future biographer’s collection and where it has remained until now. 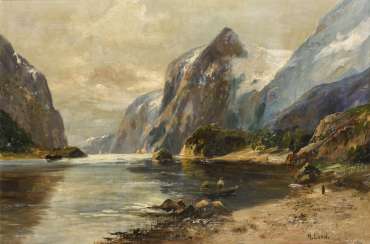 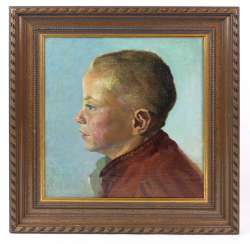 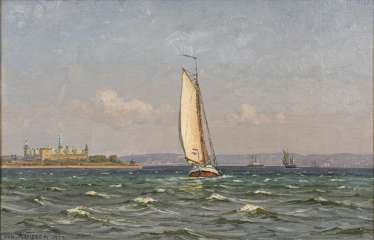 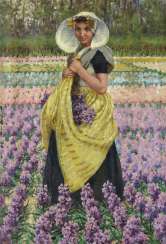 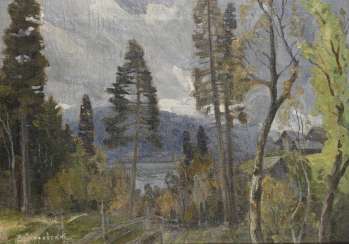 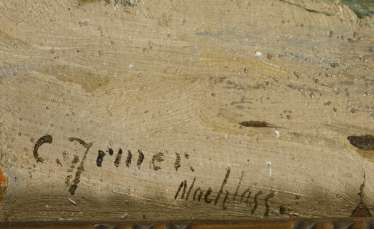 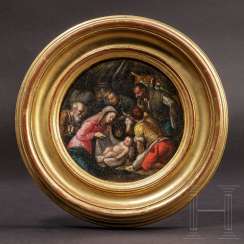 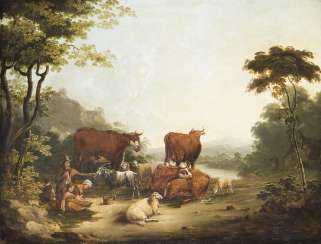 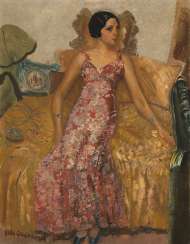