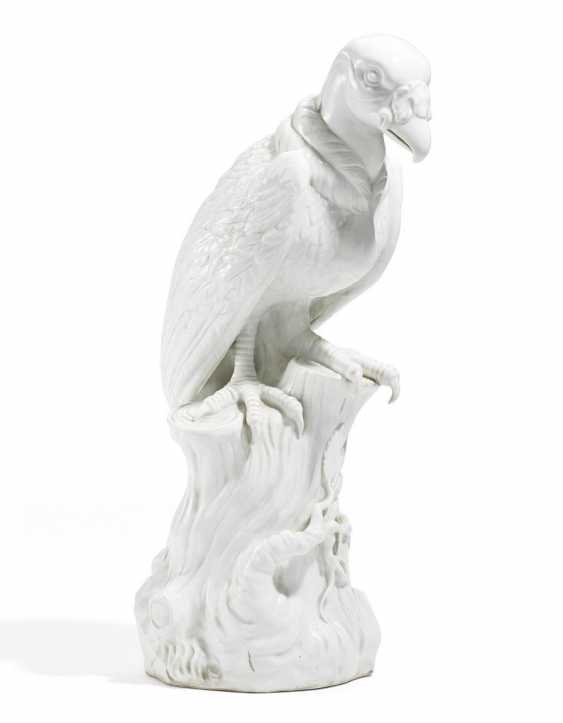 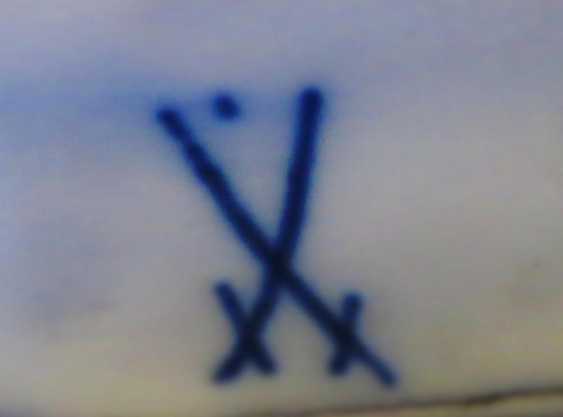 Porcelain, white. The large trunk of a tree standing king vulture, the fits of the measurements to two entries in the inventories of the Japanese Palace of 1770 and 1790. It says: "Krob bird colorful painted on a high pedestal with Laubwerck occupied, schadhafft, 1 yard of 6 inch high"
. Height 73cm.
Pfeiffer Brand, 122, Bossierernr. 37, 141. Condition A.
Provenance:
Hessian Private Collection.

The Europe-wide fame, the Dresden as a centre of courtly splendour in the 18th century. Century enjoyed, the city owed the elector Friedrich August I. (1670-1733). "August the Strong" had a pronounced passion for collecting, and was not only a patron and lover of the arts, but also an avid promoter of science. His Cabinet of natural history was considered to be the most important collection of its kind in Europe and involved a large number of exotic animals. He financed expeditions, of which the researchers are the "most possible kinds of animals alive, or in hides and Esgwelletten (skeletons) or gemahlet" to Dresden should. Johann Joachim Kändler, this extensive collection of partially living exhibits is available, as he was tasked with the design of large animal sculptures for the "Japanese Palace" in life.
The 1715 by Matthias Daniel Pöppelmann for the count Flemming built the Palais was purchased in 1717 by the Prince-elector, since the number of collections and the extent of courtly festivities required more space. The decision to accommodate the rapidly growing collection of Asian porcelains in the Palace, was caught two years later. Soon we also considered the possibility of, products of the increasingly successful Meissner Manufaktur exhibition there. A Plan of the magnificent love of the Prince-elector soon started to escalate, the required expansion of the plant. The planning included not only the accommodation of the existing collection, the creation of new, special Cabinet pieces - in a volume of, made in addition to Johann Gottlieb Kirchner, the employment of a further the Modeller is necessary. In 1731, the election of Augustus the Strong fell to Johann Joachim Kaendler, who managed rapidly, his extraordinary Talent for the porcelain to prove.
The German writer Johann Georg Keyßler (1693-1743) describes in a trip report from the year 1740, the plans for the new Japanese Palais. It says: "In the rooms of the top floor [...] is no other than Meissnisches porcelain [...]. It is the locals with all sorts of both, as foreign birds and beasts of pure porcelain in their natural sizes and colors meubliert, and you can't admire in those pieces which are already finished, the art and beauty enough."
The extraordinary quality of the animal sculptures is remarkable, in particular because there were Kaendlers first Work for the manufactory. His special Talent was a characteristic Moment in the movement of the animal to capture this naturalistic, which gives the sculptures an extraordinary liveliness 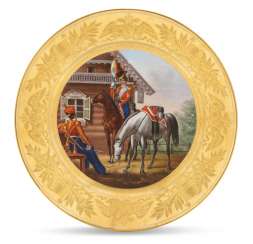 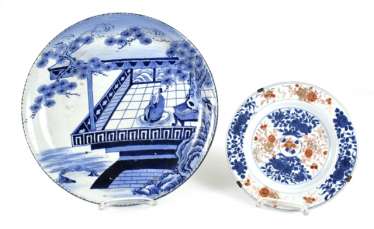 Porcelain plate with blue-and-white figure decor, and an Imari dish
€100 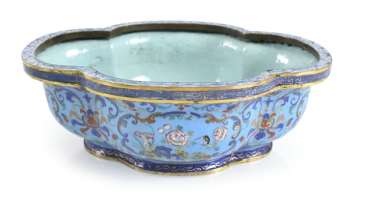 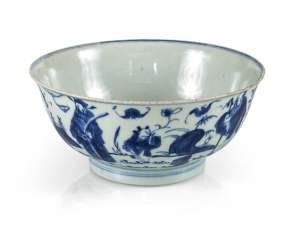 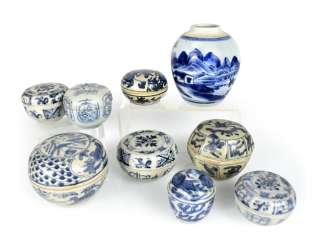 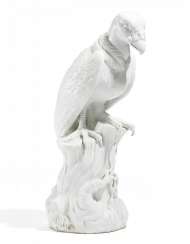