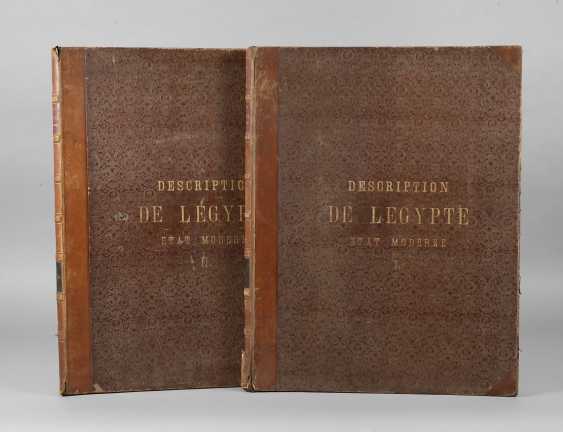 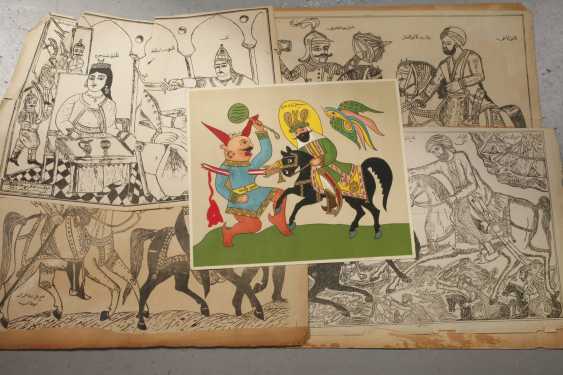 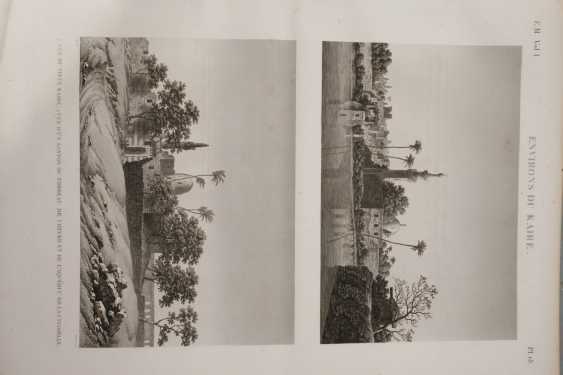 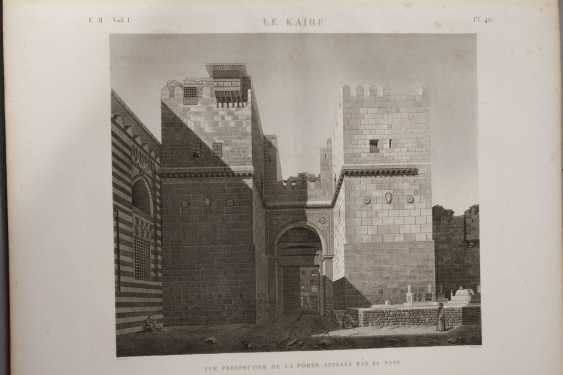 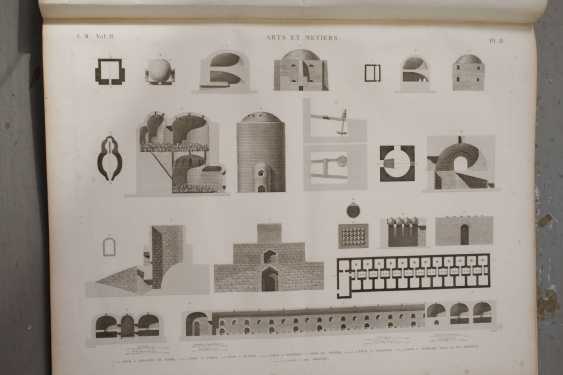 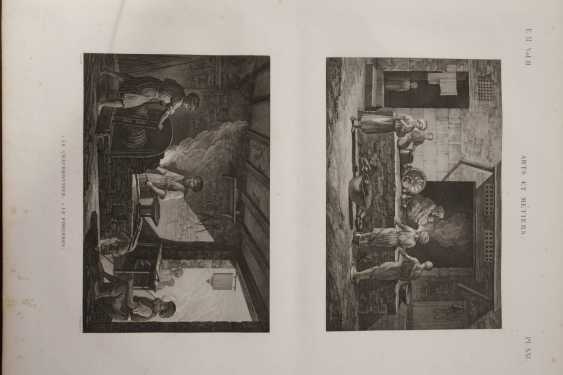 ID 38477
Lot 1684Panckouckes Description Of Egypt, 1822/23
I. and II., panel band diameter: budget Modern (volume 32 and 33) from the 37-volume Description de l'égypte ou recueil des observations et des recherches qui ont été faites en Égypte pendant l'éxpédition de l'armée francaise (description of Egypt or collection of observations and research conducted in Egypt during the Expedition of the French army), seconde edition (2. Edition), dédiée au Roi publiée par C. L. F. pankoucke, état moderne, tome premier et deuxième, imprimerie de C. L. F. pankoucke, Paris, 1823, Format Elephant Folio (67 x 51 cm), volume 1: with 71 tables, vol. 2: with title leaf, text leaf Egyptian medals and 53 plates, of which a total of six double-sheet of paper, is the magnificent copper plates show costumes and Portraits, art and crafts, landscapes, and elevations, and views of ruins, temples, antiquities, etc., from Cairo, Alexandria, Rosette, etc., the same bound in half-leather bindings a little more recently, with decorative Blind and gilt, two not-quite-full-table volumes of the so-called édition pankoucke with traces of age and use, the blotchy part a little stock and water, as well as sporadically in edge and Falznähe old restored leaves with smooth Mittelbug, both covers rubbed and on the back is torn. Info: The famous encyclopedia like Text and image collection was created as a result of the Egyptian Expedition of Napoleon Bonaparte (1798-1801) and is regarded as the occasion and basis of the science of Egyptology. In February 1802, Napoleon ordered the publication of the extensive scientific and artistic results of its military failed Expedition. The result was a complete description of Egypt at the time of the campaign concerning the antiquities, of everyday life, as well as the animal and plant world. The work of 400 copper-engravers, above all, Jean-Baptiste Lepère (1761-1844) as a draughtsman, and Vivant Denon (1747-1825), engraver, produced over nearly 20 years 837 copper engraving plates with a total of more than 3000 images, divided into eleven sections: five for antiquities, three for natural history, two Contemporary and one for geographical maps. The first edition under the direction of Francois Jomard appeared between 1809 and 1828 in 23 volumes. A second edition was published by Charles Louis Fleury pankoucke, in the years 1821 to 1830 in a smaller Format and with a part folded illustrations, and in 37 volumes, distributed, source: Wikipedia. Provenance: from the estate of Karl Herold (see also 595, 1837, 4792). The 1856 in Weida in Thuringia, Vogtland, Germany-born Karl Herold was initially as a merchant and traveled to Europe between 1898 and 1906 he was in the Egyptian Alexandria, and brought together a collection of classical antiquities. Some of the pieces he's there, among other things, by the excavator and antique dealers, Cavaliere Pietro Pugioli (excavations of a. Hadra) and supported self-excavations of the Egyptologists Otto, the son of Reuben, acquired at the com of Elephantine. From 1907 Herald as a freelance writer in Berlin was; friends with the African Explorer, Georg Schweinfurth; member of the Berlin society for anthropology, Ethnology and prehistory. To sold already during his lifetime he was a large part of his collections. The here offered pieces from the estate of Herald were handed down to date for the family. Source: L. Hagestedt (Ed.), Deutsches Literatur-Lexicon. 20. Century - a Biographical and bibliographic guide, Vol. XVII (Henze-Hiesl), p. 224; R. Swede, investigation of some of the plant remains from ancient Egyptian tombs. In: treatises of the scientific society Isis in Dresden, 1915, p. 40; W. Honroth/O. Ruben the son of/F. sugar, report on the excavations at Elephantine, in the years 1906-1908. In: G. Steindorff (Ed.), Journal for Egyptian language and ancient studies, vol. 46, 1909/10, p. 14. 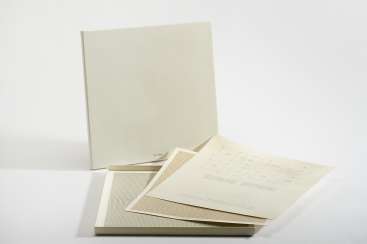 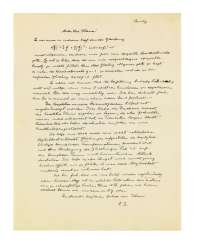 'Feeling our way': a densely scientific letter, including an equation
£12 000 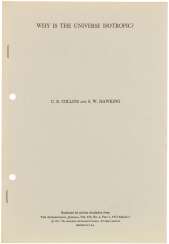 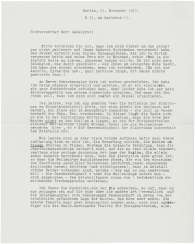 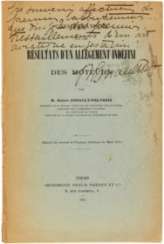 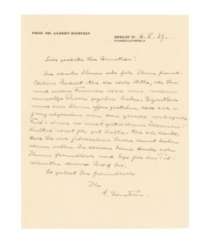 On the 'extreme cult of personality' focused upon himself
£12 000 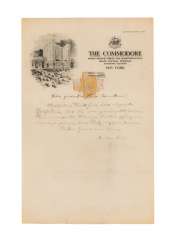 Thanking another Einstein for a pipe
£5 000 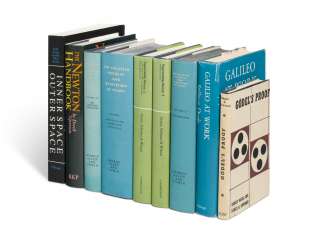 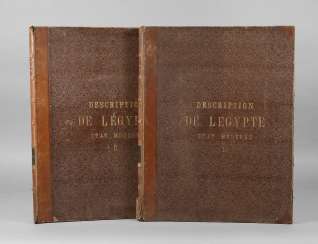