Artist pagePushCommentsFavorites
Price:€1000 € 1 000
Buy it now
Make offer
Ludmila Vasilevna Blohina. Trap
Illustration to the novel by L. V. Blokhina the "Power Orchis"
An excerpt from the novel.
Chapter 5
Guerino.
He came out of the woods. Ahead stretched a boundless plain – possession of his father the king of Bertoldo.
− Home, sweet home! – enthusiastically thought the young man stride and headed along the trail to the city, seeing on the horizon. Around fragrant fields of blossoming yellow Wajda and lilac lavender. Hunger forced him to quicken the pace. In his bag there was only the orchids. During the darkest times these tubers rescued him. Only one eaten by the white ball gave strength for the day, blunting hunger. Guarino knew that strength and endurance he has in salep. But all of it is to spend he had no right. Father is ill. It is for these apples of youth, and he sent his sons. Guerino by accident, found them, and now carefully holding with a hand bag, hurried to the Palace. Dressed in ordinary clothes of the poor he went to the closed gate of the city and realized that to find himself he can't. − Who am I? What did Giacomo? If he went back to the Palace or not, need to get in there unnoticed, decided the young man. Clapped on the head the hood of his cloak from fibers of kenaf, he went along the city wall to the manhole known him since childhood. But, alas. The hole in the wall was closed with heavy boulders. − Yes, I was hoping for. Giacomo aware of this loophole in the city. Surely it it and shut it down. Will have to go to the lake. I'll try to get into the Palace through the secret tunnel, he thought Guerino, heading back towards the forest. The lake is crowded day and so he bided his time until the sun goes down. As soon as the mist fell on the field, and in the darkness it was impossible to distinguish anything at arm's length, he almost touch went along the familiar road to the lake. The moonlight penetrated through the trees. That seemed a lake, only in some places covered with silvery ripples. The croaking of frogs, the rustle of leaves in the breath of the fresh night breeze reminded Guerino sweet moments of childhood. Descended into the hollow where the entrance to the tunnel, overgrown with thorny barberry bushes, he heard a rustle. Looking back, the young man saw the Jaguar. The animal emerged from the bushes, prognuv the back, just a huge cat, prigotovitsya to jump on a mouse. Guerino saw the beast too late, when already was two steps away from him. Jaguar froze in position, poised to jump the huge beast. To attack her was enough to make one jump. Guerino realized that the beast is watching him, and tried to make an indifferent and calm appearance. He seemed turned to stone, stood motionless, clenching his fists and jaw. The young man stared without blinking at Jaguar. A few minutes passed and it seemed like an eternity. The tension increased and it seemed that for another second, and burst into thunder. But the beast froze in his eyes and with his mouth. Back Guerino felt some movement, felt that there is something going on, but turn could not. He was not bound by fear or the unknown, inexplicable sense of danger forced him to stand still. Suddenly the Jaguar gracefully sat down, drew back, hissed and darted into the bushes. Guerino a sigh of relief looked around. Before him stood guards in black cloaks, helmets of boar tusks and armor sparkling silver in the glow of the moonlight coming through the fog. Continued: https://luchisolka.com/shop/product/kniga

Sign authorship printed on the photo by a computer program.

Characteristics of the artwork - item 24085 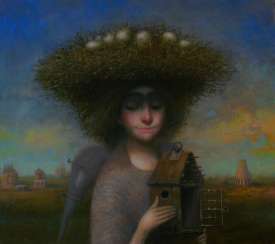 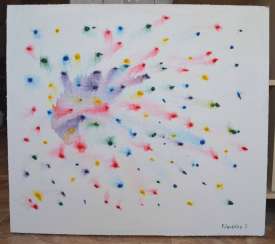 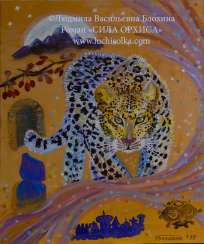