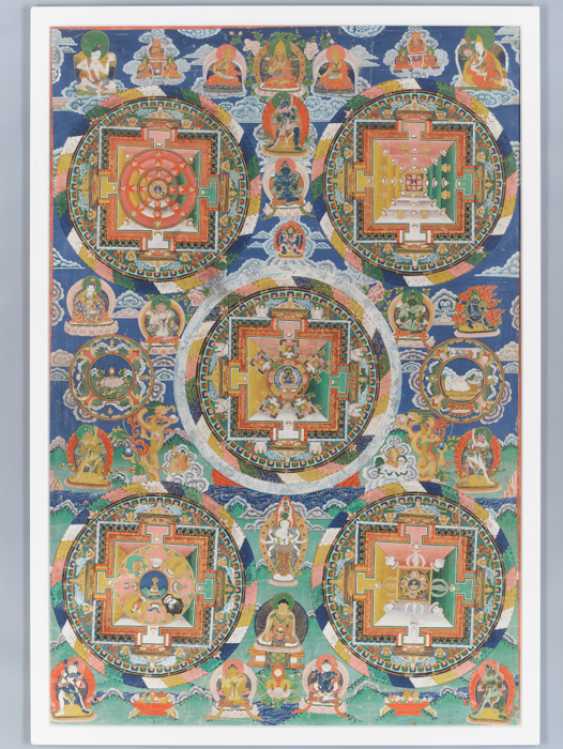 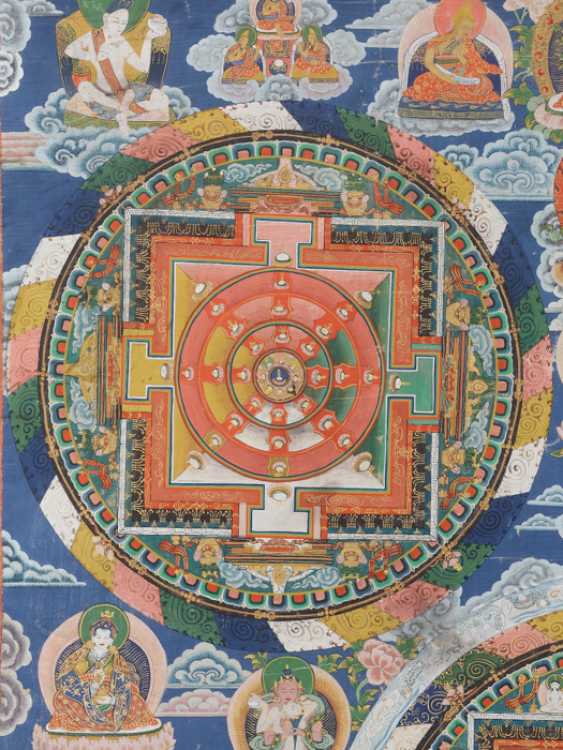 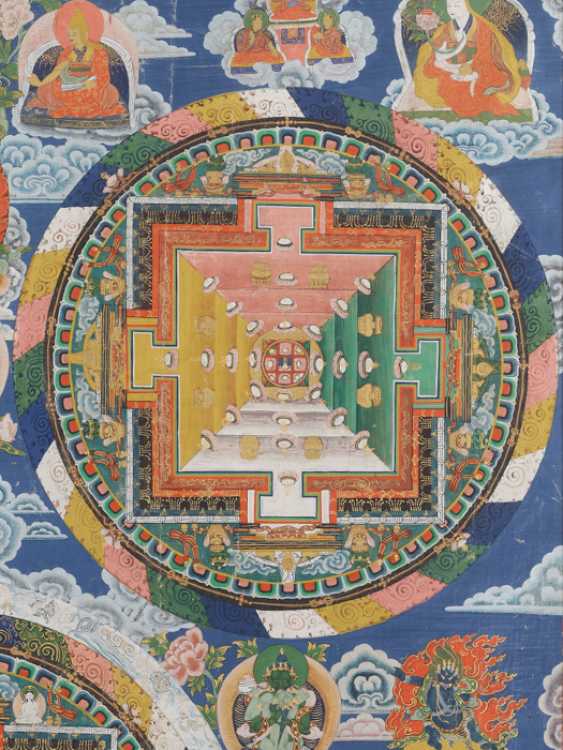 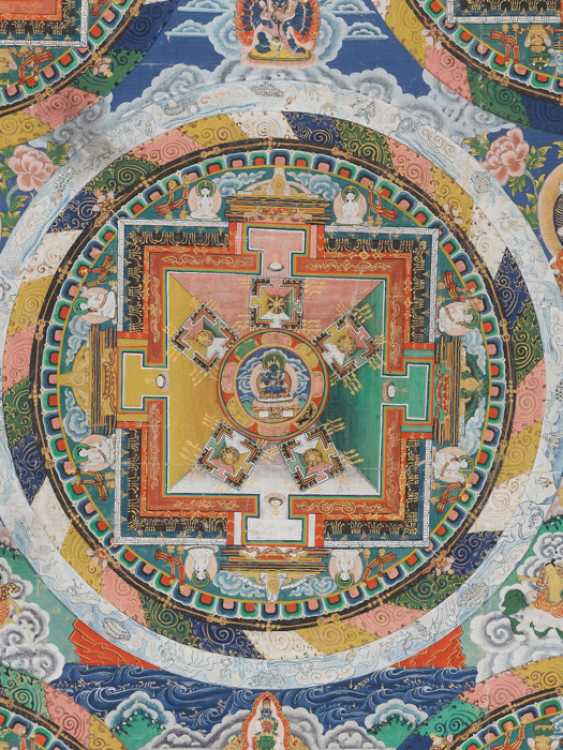 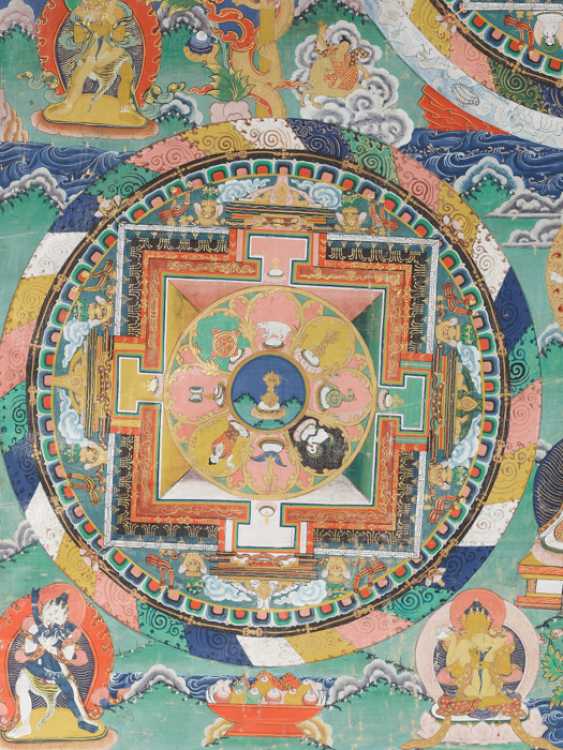 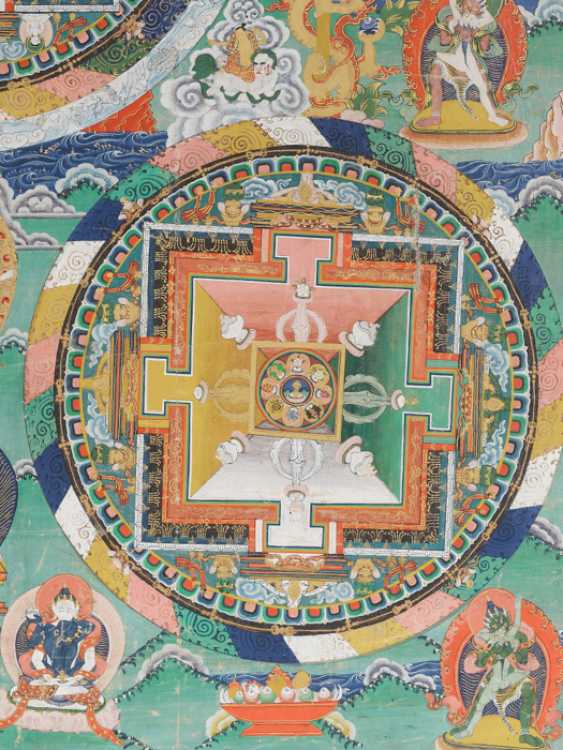 An unusually well preserved, large meditation mandala with depictions of the five diamond chains, Vajramala, each of which is assigned a specific divinity, as well as numerous other surrounding depictions of gods from the Buddhist pantheon. There are too many to discuss each and every detail. The buyer will naturally be provided with a folder with photographs of all details and more precise descriptions of the details. The large circle in the center contains the crystal palace with its four gates symbolizing the Vishvavajra or, rather, the indestructibility of its teachings and the absolute as it extends in all cardinal directions. In the center is the god of initiation, Cakrasamvara, patron divinity of the highest blessedness. Four smaller circles are positioned around the larger circle, so that they together suggest the eight-spoked wheel, symbolic of the teachings, along with Cakrasamvara as the master of this wheel of happiness. In the center of Mandala’s uppermost horizontal row is located Tsongkhapa, who is wearing the hood of the Gelug monastic order, which he founded, while carrying the attributes of the Bodhisattva Manjushri, the book of wisdom and the sword. Beneath him are three figures consisting of (from the top down): two yidams, the upper one of whom might be Kalacakra in yabyum (unification) with his paredra, while the lower one is Cakrasamvara, also in yabyum with Vajravahari, beneath which the last figure represents Mahakala with 18 arms and nine heads before a flaming halo, also in yabyum with his paredra. Beneath the large circle in the middle stands the eleven-headed Avalokiteschvara with eight hands, the main hands being in namaskara mudra. In this form, he is a personification of all-encompassing compassion. The uppermost, red head is that of the Buddha Amitabha, his spiritual father, who, as the head abbot of the order, is in a very Buddha-like position with an alms bowl and his right hand in the position of “earth touching”. The lowest row ends with various divinities, some of which are in exultant yabyum. On the back of this mandala depicting the tantric way to enlightenment are the mantra om, ah, hum’s characters as well as text of which we have a translation. 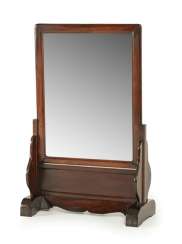 Mirror in wood frame with Stand from Hongmu
€600 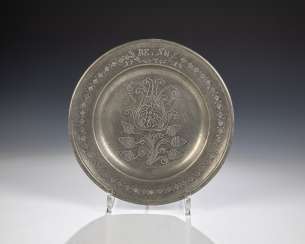 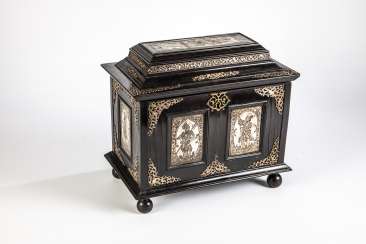 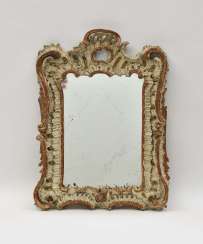 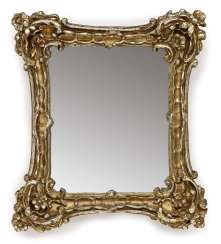 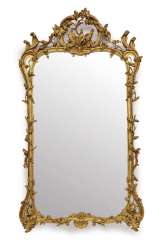 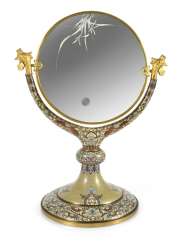 Mirror with Cloisonné-decor on Stand, the surface of the mirror engraved
€1 500 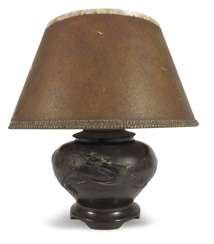